The Curtain Rises: Microgaming’s The Phantom of the Opera Slot Goes Live

Let all your senses experience the magic and the fantasy of the new Microgaming video slot The Phantom of the Opera. It takes a bit of a soft spot for drama, but as long as you can appreciate the stage arts and love slots with advanced graphics and compelling themes, this one will be right up your alley.

The launch was officially announced in February 2017 when Microgaming signed a licensing agreement with The Really Useful Group to adopt the 2004 movie version of Andrew Lloyd Webber’s The Phantom of the Opera. The world-famous musical was made into a motion picture and it starred Gerard Butler. Counting on the movie’s unequivocal success, the people at Microgaming decided a new genre introduction would be a good move, so they gave it their best in developing a musical-themed slot. And not just any musical, mind you! The Phantom of the Opera tells a story about the glamour of the Paris Opera House, beneath which a man hides, ashamed by his physical appearance. It is also a powerful story about love that transcends all popular conventions. After all these years, The Phantom of the Opera continues to mesmerise audiences at theatres worldwide. Now, it can continue to entertain online gamblers at Microgaming casinos!

About The Phantom of the Opera Online Slot

Come November, and Microgaming launches its The Phantom of the Opera project, followed by a huge networked promotion and heavy marketing. Everybody just needs to know about it! With a timeless musical score and powerful scenery, this branded video slot seems to be another win for Microgaming. 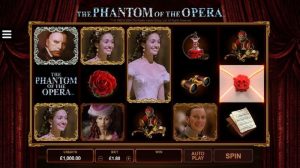 The Phantom of the Opera gameplay

The game features modern game mechanics, offering 243 ways to win instead of regular paying lines. It is played on 5×3 reels set and includes the film’s main characters. They are high paying symbols and can appear double stacked on screen for even higher payouts. Lower value symbols are items that suit the theme, such as binoculars, roses, and music note sheets.

The Phantom of the Opera slot is a feature-rich game, with five rewarding bonuses to take advantage of. The Letter Bonus and the Chandelier Bonus can happen randomly on any base game spin. When the letter symbol lands on reel 5, a cash prize will be awarded to the player. The Chandelier Bonus alludes to the famous movie scene where The Phantom cuts down the chandelier, furious. The screen will go dark, and when the chandelier falls it will make two or three reels Wild. Three or more Scatter symbols (the mask) will trigger the main feature that consists of three bonuses: the Masquerade Bonus, Music of the Night and All I Ask of You. Accompanied by the unique musical score, the player has the chance to win lots of cash prizes, advancing through the feature tiers in the Masquerade Bonus. The Music of the Night Bonus awards you with 10 free spins with added enhancers such as multipliers and random Wilds. All I Ask of You also features 10 free spins but with Dancing Wilds this time, a unique Microgaming feature that will make you sway along with the main characters.

If you’re a fan of the stage musical and the Joel Schumacher’s film adaptation, look for Microgaming and Quickfire casino venues and try out The Phantom of the Opera slot today. You may still catch some of the celebratory promotions and enhance both your pleasure and wins.

NetEnt Casinos: Why they are so Special?

Five Casino Movies You Must Watch