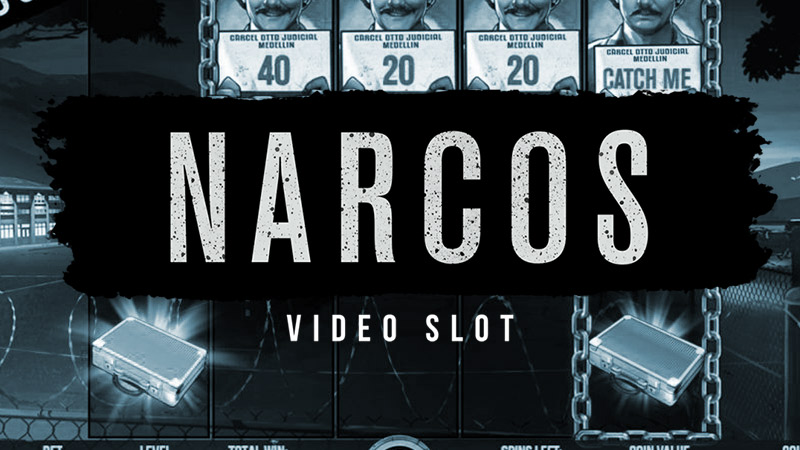 One of the most highly anticipated titles of the year is about to drop on a casino near you! It has been a while since Narcos slot was announced and the question on everyone’s lips is – was the wait worth it? We’ll get to that answer in a minute, a little bit more suspense won’t go amiss.

NetEnt is the developer behind this fantastic-looking slot. Based on the Netflix series of the same name, the game includes familiar faces and imagery. But, more importantly, it catches the spirit that made the show so famous.

The Narcos slot machine is made in partnership with Gaumont Film Company and is based mostly around the first series. Season 1 has proven to be the most popular one so far and focuses on the early career of the ruthless drug lord Pablo Escobar.

First impressions of the game were fantastic. The game has the feel of the Narcos show with shades of Grand Theft Auto with its gritty cartoon-like look. It is easy to find yourself hooked instantly and once the extra features kick in and grab hold, it can be hard to give up. With that, let’s head to the seedy streets of South America in the 1970s, dodge baddies, and try to bring the infamous Pablo to justice.

Narcos slot game is played on a 3-row x 5 reel grid with 243 pay lines. A typical setup, but one that has been reasonably uncommon amongst NetEnt’s recent releases. Wagers range from a low 0.20 coins for hard-pressed DEA agents all the way up to 400 coins for wannabe drug barons. Stakes are set by choosing coin values of 0.01 – 2, and bet levels of 1 – 10. A solid RTP rating of 96.23% means the game provides ample chances for landing winning combinations.

Pablo Escobar and his crew had one goal in mind when they were in operation – making money. Like-minded gamers could find their wishes fulfilled if they are lucky with the games top prize of €/£602,400. The great thing about winning the jackpot is that no DEA agents are going to kick in your door to try and confiscate it!

Narcos slot game has an excellent mix of low, medium, and high pay icons, along with bonus symbols. All have been creatively and deftly crafted with a fantastic look that manages to capture the danger of the show.

The low pay symbols are the J, Q, K, and A. All have been decorated with guns, grenades, and money to add a threatening appeal. Despite these symbols showing up since the dawn of online slots, their appearance here feels fresh and new. It goes to show that a little imagination can easily revamp tired old symbols.

Mid-level symbols are the monoplane and the pink flamingo. NetEnt themselves admit that last one was homage paid to the classic gangster film Scarface. Itself a 1980s romp through the Miami underworld.

Picture icons make up the remaining high paying symbols. Fans of the series will recognise good guys Javier Pena, Steve Murphy, and his wife Connie Murphy. It’s not all goodies of course, and rounding out the high-value symbols is bad guy Gonzalo Rodriguez Gacha, gun at the ready.

The government badge is the Wild and can stand in for main game symbols. Not only that but if they land as part of winning combinations, they become Walking Wilds. They then move one space to the left with the next spin. This process repeats while winning combinations continue to land. The Walking Wilds are a creatively lucrative thrill when they cascade one into the other and add up.

The Oldsmobile car is the scatter which can appear on reels 1,3 and 5. When three of them land, the player is treated to 10 free spins. During this feature, high paying symbols can be transformed into Wilds, and the Walking Wild feature still applies. The free spins play on in the middle of the Walking Wild sequence, even if they have technically run out which is generous. It’s like getting an extra dose of free spins to increase the mayhem!

At any time during the main game, the cartel can make an appearance in one of their cars with guns blazing. For once this is a good thing, and when bullets hit a high-value icon it can become a Wild to help create more winning combinations.

Pablo Escobar holding the ‘Catch Me’ sign is the Locked Up symbol, and three unlock the feature. The action then shifts to a different game arena where multipliers, upgrades, regular and golden Locked Up symbols are used to create lucrative returns.

This is a high energy slot machine that will appeal to a wide range of gamers. Fans of the series are obvious candidates and will be more than satisfied with NetEnt’s effort. But the game will also appeal to anyone who likes a fast-paced slot full of drama, noise, and action. Narcos provides a thrilling ride with danger lurking around every corner. Keep your guard up; drive-by shootings can occur at any moment!

The game’s theme works fantastically well as a slot, with so many elements from the original series winding up in the game. The bonus features have been well planned and slip seamlessly into the main game. The drive-by shooting gets the blood pumping when the bullets start to fly, and the Locked Up feature can be extremely rewarding.

So, was it worth the lengthy wait? We think so, and this slot machine game has the potential to become an absolute classic. If you are even mildly interested in gangster movies, then Narcos is an unmissable game. The slot drama is amplified by the ever-present danger of the criminal underworld.