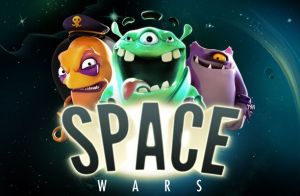 Space Wars slot is played on a 5×4 playing field and has 40 pay lines. Rather than offering gamblers standard fare bonuses like free spins, however, you only get a single re-spin at your first win, which allows you to essentially double-dip on each win if you’re lucky enough.

Honestly, while we may not be the greatest fans of the cartoony art style, we can’t deny that Space Wars slot machine looks really good. It’s to be expected when NetEnt is making a slot, but there’s no denying there’s a fair amount of expressive effort going into non-verbally describing how each race potentially is.

You’ll quickly pick out who are the arrogant folks of the galaxy, the grumpy, the angry and the mischievous. Heck, some don’t even look like they’d be fighting for a powerful crystal, but we suppose it is just that powerful that they can’t afford to let it fall into anyone else’s hands. Such a grim story is hidden by cartoony visuals.

On the gameplay side of things, Space Wars keeps to a low to medium variance play style. While a lot of games are reliant on their bonuses and features to carry them through, Space Wars slot doesn’t have that issue.

The re-spin is certainly a welcome way to hopefully score twice for the price of a single spin, but it won’t make or break your bank, and there are no other bonuses that can shift things up. Because of this, you will, for the most part, be tackling regular gameplay, so if you prefer chasing after bonuses, you might want to look elsewhere.

The first time you get a win on the reels, the aliens that were the main part of that win are teleported into the tube on the right side of the screen. There, they’re cloned and sent back onto the playing field, making sure the next roll of the reels is going to make them appear stacked, which maximises the chances of getting another win with those same characters, potentially an even bigger one than last time.

In fact, icons, in general, have a very high probability of appearing stacked on the reels, which is more or less mandatory, due to the 5×4 playing field.

Our overall verdict for this one isn’t a glowing recommendation, but we certainly can’t say it doesn’t deserve your attention. The re-spin is a good mechanic, but not quite enough to stand on its own, in our opinion.

The visuals and the soundtrack are very well done, but whether or not you’ll like it, you can only decide for yourself. In our opinion, it deserves a chance to impress you, even if it hasn’t quite managed to do it for us.